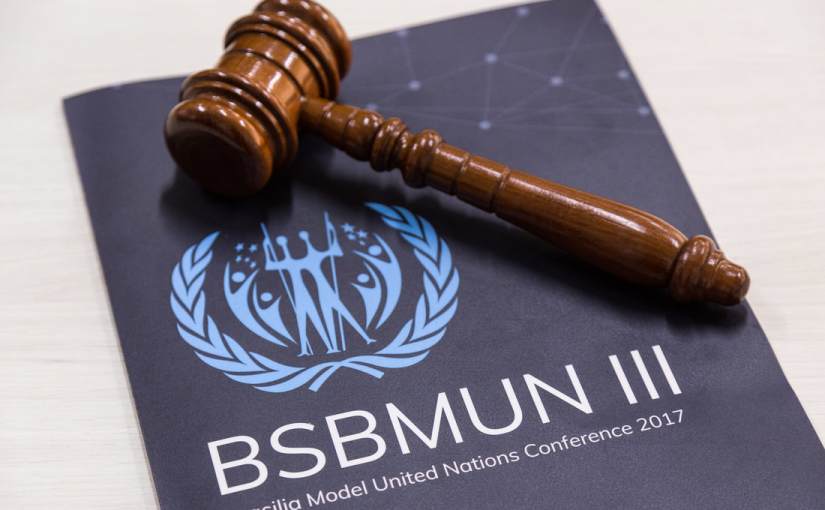 A few weeks ago, between October 18 and 20, EAB hosted its fourth edition of the BSBMUN conference. For the unaware, Model United Nations (MUN for short) is a live United Nations imitation which allows students to learn about diplomacy through UN-style debates which can involve topics ranging from the Myanmarian Sectarian Crisis to the South China Sea Conflict. Annually, EAB hosts an MUN conference denominated BSBMUN (BSB being an abbreviation for “Brasilia”) which counts on the participation of various school across Brasilia where students can debate topics and learn about international relations and public speaking to reach a resolution agreed upon by all.

In the most recent fourth edition of BSBMUN there were eight committees: the Security Council, the ECOSOC, the Commission on the Status of Women, the World Health Organization, the Council of the People’s Commissars (Lenin’s Cabinet) – 1918, the Munich Conference – 1938, the UN Office on Drugs and Crime, and the Assembleia Legislativo do Rio de Janeiro – Sessao Extraordinaria de Crise (1997 – 2018).

The Security Council is one of the six principal organs of the United Nations. It is tasked with discussing topics that will maintain world peace and has powers to establish peacekeeping operations, international sanctions, and the authorization of military action. In BSBMUN, the Security Council had two topics: Topic A – Drafting strategy in dealing with Islamic militancy in Afghanistan; and ​Topic B:​ Dealing with Myanmarian sectarian disputes. The chairs for this committee were Gabriel Paiva and Joao Guilherme Borges, both from School of Nations.

An abbreviation for the United Nations Economic and Social Council, ECOSOC is also one of the six principal organs of the United Nations. It is tasked with the discussion of economic and social issues and the coordination of related work of several other UN agencies. In BSBMUN, ECOSOC had two topics: Topic A – Solving the social and economic repercussions of the Congo wars; and ​Topic B – Analyzing the social and economic ramifications of different prison systems. The chairs for this committee were Andressa Souza from EAB and Mariana Farhat from School of Nations.

Commission on the Status of Women

Abbreviated CSW, the Commission on the Status of Women is “the principal global intergovernmental body exclusively dedicated to the promotion of gender equality and the empowerment of women.” In BSBMUN, CSW had two topics: Topic A – Women’s Reproductive Health and Abortion Policies; and ​Topic B: – Addressing the Women’s Rights Abuses in Saudi Arabia. The chairs for this committee were Giovanni Tigges from the Swiss School of Curitiba, Julia Quintao Frade from UnB, and Rafael Almeida from Brasilia International School.

Abbreviated WHO, the World Health Organization is a specialized UN agency on the topic of international public health. It has played a vital role in the eradication of smallpox and currently is focused on both communicable and non-communicable diseases such as HIV, malaria, ebola, nutrition, food security, and sexual and reproductive health. In BSBMUN, WHO had two topics: Topic A – Women’s Reproductive Health and Abortion Policies; and ​Topic B -​ Addressing the Women’s Rights Abuses in Saudi Arabia. The chairs for this committee were Luisa Rasia Montenegro and Isabella Marques from EAB, and Jing Jyng Chang from School of Nations.

The UN Office on Drugs and Crime

Abbreviated UNODC, the UN Office on Drugs and Crime “is one of the top enforcement agencies in the world focusing on illicit drugs and international crime.” It has three main pillars which are field based cooperation, to aid member states in their fight against crime and illicit drugs; analytical research, to increase knowledge of such illicit activities; and normative work, which assists in the implementation of treaties and legislations. In BSBMUN, the UNODC had two topics: Topic A – The Question of Combating the Opioid Crisis in Asia; and ​Topic B -​ The Question of Combating Human Trafficking in Latin and South America. The chairs for this committee were Ryan Sayah and Kenna Reichner from EAB, and Rebecca Salazar from Colegio Presbiteriano Mackenzie.

The Council of the People’s Commissars – 1918

The Council of the People’s Commissars is the name given to Lenin’s Cabinet “during the initial days of the Russian Soviet Federative Socialist Republic.” It was tasked with making decisions that will have to recover the Soviet government from its “most desperate hour” along with keeping the population fed and its armies fighting. Taking place in 1918, the Council of the People’s Commissars is a committee that does not follow standard BSBMUN procedure. The chairs for this committee were Victor Foresti and Victor Rasia Montenegro from EAB, Luiz Buscariolli from CMB, and Joao Cardoso from St Nicholas School (in Sao Paulo).

After the dictator of Germany annexed Austria and wanted to take Sudenteland from Czechoslovakia as well, the Munich Conference was called where Adolf Hitler met with representatives from France, the United Kingdom, and Italy. An agreement was reached where Hitler could annex Sudenteland but had to promise to not invade any other sovereign territories. In BSBMUN, the Munich Conference had two topics: Topic A – Sudeten Crisis; and ​Topic B – Revisiting the Treaty of Versailles. Taking place in 1938, the Munich Conference is a committee that also does not follow standard BSBMUN procedure. The chairs for this committee were João Vitor Oliveira de Souza, and Laura Uccello and Yasmin Abbas from EAB.

“Assembleia Legislativo do Rio de Janeiro” was the only committee in Portuguese and thus, also does not follow standard BSBMUN procedure. In this committee, delegates will discuss ongoing questions about crime and public security in Rio de Janeiro that has plagued the region since 1997. Since it was enacted as a crisis, the two topics of this committee were only revealed on the day of the debate. The chairs for this committee were Isabel de Ávila Torres from Colégio Presbiteriano Mackenzie, and Artur Coutinho from School of Nations.

As the clock ticked on indicating the closer we were to beginning the conferences, my heartbeat raced as fast as a race car. I was welled up with emotions: excited, nervous, anxious, curious and most of all, fascinated. Numerous thoughts raced through my mind: “What if I mess up?”, “What if I don’t get an award?”, “What if I provide the crowd with incorrect information and somebody corrects me, leaving me in a deep well of embarrassment?”, and the worst one yet,”what if I don’t get an award?” These reflections always come to a delegate in the initiation of the meetings. However, these actions only help you throughout the course of the trip since you grow out of them. In other words, you develop into a different person in just a couple of days causing each day, hour, minute, second causing them to be significant and that is why every day of the trip will be discussed in this article (in the eyes of a timid person).

On the first day, I glanced at the clock for the thousandth time, awaiting for the opening ceremony that never started. I spot all the new people approaching my eyesight: new delegates, experienced delegates, freshmen, senior etc. After a decade of awaiting, the most amazing, motivational speeches were given to boost confidence in each and every delegate. Afterwards, lobbying session began; not only did this period of the meeting spark new knowledge towards the topic at hand but also friendships with intriguing people from all over Brazil in schools such as Graded, Chapel, PASME, EAB, EABH, EAC, St Paul’s, EARJ and more. Furthermore, instead of just discovering your allies in the conflict, you detect allies for the entire trip and maybe in another period in life. This can be proven by the delegate Jader Barbalho who said,”I loved everyone there, especially my fellow delegates! Everyone was just so nice and caring. It was my first time and I instantly made lots of friends with the other delegates and the chairs, I think I will keep these friends for some time as I can always meet them in MUN and NR. I also really liked my chairs who were serious but also funny!” And that is how we terminated our day; a day full of acquaintances.

“Rosy- fingered dawn appeared” marking the second day; the day of debates. Just thinking about it would give me chills since it is so nerve wrecking in the start. However, I was not the only one who felt this apprehension; all of those who spoke would stutter causing a feeling of proximity with delegates I had just met. Though the monster we call fright was strongly present in the dawn of our growth, it gradually decreased throughout the course of only a couple of hours shown by the quantity of times numerous delegations who developed confidence by asking points of information and, through baby steps, going to the podium to answer the points of information. By the end of the day, every single delegation could already classify each other as allies though in the view of the modeled United Nations they were not. In other words, as the closing of the afternoon arrived and the youth of the night replaced it, everyone could consider their peers more as friends. Anyhow, not only had the members of  the American School of Brasilia gotten closer to foreign schools but also developed tight bonds with other EAB members; I met freshmen and seniors I expected I would never share a word with while I reached devoted connections with people I had previously known. Even though we arrived in the city of São Paulo as only acquaintances or friends, we definitely left as a family. In other words, the students of the American School of Brasilia flourished together.

A gloomy thought bloomed in my mind as my body awoke on day three: it was the last day. I had gone through so much with these people in such a short amount of time. Additionally, it was time to see if the hours spent working on the position papers and resolutions were worth it by receiving a prize- the award. As the delegates of our school approached their seats for the general assembly, a tension in the room was felt. Common thoughts pass through every student present, “Who will get the award?” “Will it be fair?” The first minutes were skipped on the clock…  eventually turning into hours. During those hours, one main topic was discussed in the general assembly. Numerous delegates were focused, curious, participating meanwhile others were sending notes to provoke the delegations present. These events helped swallow down the anxiety we all felt, until its conclusion; once the word “awards” was mentioned, every delegation glimpsed at one another displaying apprehension in their eyes. However this action did not stop the handing out of the awards. These prizes provoked the following events such as people crying of joy and sadness. Another event that also followed the awards was the closure of the trip. It felt like it had been a century we had remained in São Paulo, but it also felt like an hour. On the way back to Brasilia, I contemplated at how grateful I was for receiving a prodigious experience with such compelling people because these are one of the various things EAB gives their students.